Over the years we have read about american spies that were convicted as "double agents". They tried to serve two countries at the same time, but in the end they failed both. The issue is thought provoking and life changing. As Jesus said in Matthew 6:24, "No one can serve two masters"
Paul faced quite a dilemma with the churches in Galatia. The believers had initially trusted in the finished work of Christ for their salvation, but now there were false teachers that sought their allegiance. These teachers were winsome and convincing, teaching a works salvation. They were seeking the approval of their own circle of peers and were determined to increase their followers. Paul sought the approval of the Lord alone and was simply saying, "No one can serve two masters"
There is no safer path than the one that follows the Lord alone. Do you seek the Lord's approval in every decision you make? Is His will the most important thing in your life? Serve the Lord and you will never go astray. Remember, "No one can serve two masters" 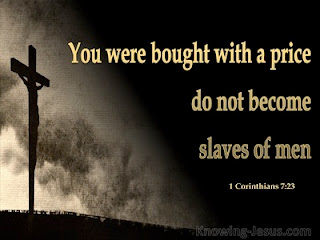